Buying an existing house in a competitive market meant a Wellington couple had to prioritise what improvements they could afford to make their new home more energy efficient and comfortable.

This is related to:

Finding a house to buy

After renting a cold house in a city fringe suburb of Wellington for six years, this professional couple and their eight-year-old child were keen to buy a home of their own. And with a baby on the way, making the house warm, dry and energy efficient was a priority.

Although they wanted to stay in their current neighbourhood because they liked the community, as well as being close to the city for work, they widened their search to include other areas.

After looking for over a year at multiple houses in multiple suburbs, and spending multiple dollars on builders’ reports and solicitors’ fees, they found a house not far from where they were renting. This meant cycling to work was still an option, and they would still be close to friends and schools.

The house they found was a 1960s, two-storied weatherboard home with drive-on access. It also had the added bonus of a studio flat that could be rented out, which would help pay off the mortgage.

Sun, proximity to public transport and school were top priorities. Before going to the open home, they looked at the online WalkScore and NIWA SolarView tools.

Walk Score
Enter your address in to this simple online tool and receive a commute report comparing bike, bus and car transit. It shows your options for getting around by car, bus, bike, and foot.
NIWA SolarView
This calculator estimates the solar energy that can be collected by a solar capture device (solar panel) at a given address, panel direction and roof slope.

The program combines an image of the local landscape with irradiance data from the nearest climate station.

This one had good sun, was within seven minutes’ walk of public transport, about 15 minutes’ walk to school, and 15 minutes’ bike ride downhill to work (or 30 minutes back up the hill!). An unexpected bonus was that the house also had two bathrooms, one upstairs and one down.

The building report showed that the roof needed a bit of attention, and that there was a little bit of bubbling of paint on the bathroom wall, probably from moisture.

The couple brought in a builder and a plumber to double check if anything had been missed, whether there were any major issues, and if so, how much they might cost to fix before they put in their offer.

The couple also sorted out house and contents insurance before they put in their offer – and were very grateful that they had when the first Kaikoura earthquake struck three days after they moved in!

Fortunately, the more expensive renovations had already been made to the bathroom and kitchen within the last eight years. The previous owners had combined the laundry into the kitchen, allowing more space for the kitchen and dining areas. This meant the couple could focus on changes to make the house drier and warmer without the expense of major renovations.

The kitchen has a lot of storage, a range hood over the hob which was ducted to the outside, and flows out into a sheltered courtyard. The couple already had an energy-star-rated fridge and front loader washing machine which they had purchased when renting.

With a heat pump downstairs and a flued gas heater upstairs the house is warm in the living areas, and new carpet had been laid in the lounge, child’s bedroom and downstairs. The rest of the house has attractive matai floorboards in good condition.

The house already has a fair amount of insulation in the roof, although there was none under the floor.

The bathrooms all have extraction fans ducted to the outside, and the windows provide good cross-ventilation. Opening the windows downstairs and upstairs produces a noticeable effect and airs out the house quickly.

Quick fixes on a limited budget

The first thing the couple did was to install new long-life smoke alarms in both the flat and main house. Older ones that were past their ‘best-by’ date were replaced.

With not much money left over after buying the house, they decided to make small but effective changes immediately to make the house warm and energy efficient. Downlights and underfloor insulation were chosen as priorities. 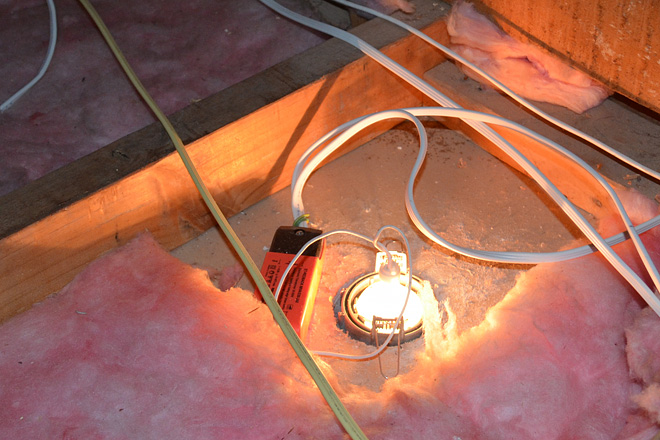 The kitchen had 12 older style halogen downlights and a nine-halogen bulb chandelier. The downlights required the roof insulation to have a 30cm gap around each downlight, which lets heat escape.

By replacing the halogen downlights with energy efficient IC-F rated LED lights they can insulate over the top of the lights, and fill the gaps in the insulation from the old downlights. Not only will this make it warmer it will also cost less for heating and lighting. The fittings are also tightly sealed, which prevents moisture generated in the kitchen from moving up into the roof space.

No underfloor insulation was an issue under part of the top storey – most of the house is two storeys, with an underfloor at the rear where the house backs into the bank. The area above the ground, around 30 sqm, was insulated with R1.8 polyester insulation. With three professional installers the job was done in around an hour.

They also plan to put polythene on the ground under the house themselves to prevent rising damp. They expect this to cost about $100.

Concerned about the lack of heating in their child’s room, they purchased a 1000-watt radiant electric heater with thermostat, daily heating schedule programming, and draught and motion detectors. This is cheaper to run than a convective heater, and also cool to touch, making it safer for their child to play nearby.

Having a background in sustainability and resource efficiency helped the couple to prioritise what to do to make their house warmer, healthier, safer, and more efficient to run. So far, their small fixes have cost less than $2000, and the house now retains heat better, and uses less energy to light the kitchen.

With their initial changes made or underway, their focus is now on maintenance and saving up for more expensive improvements.