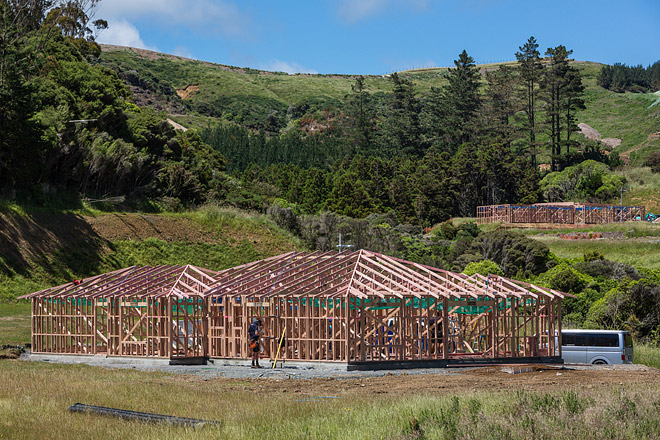 When you're designing a home or planning renovations, there'll also be other considerations such as local climate, view, terrain, vegetation, street access and noise. You'll need to balance these against the benefits you can achieve through harnessing the sun's energy for heating and breezes for cooling.

When should you think about orientation?

It's important to consider orientation before you buy a property (including an apartment or townhouse), or start designing a new home or renovation.

It's also worth considering orientation for your existing home, especially if there are small or no windows facing north, or large areas of glazing facing east, west or south. There may be simple ways to make the most of the orientation – for example, increasing the size of north-facing windows or swapping the use of existing rooms so that the sunniest rooms become your living areas.

The exact amounts and proportions of glazing you choose will vary depending on other considerations such as:

It is also worth considering the type of glazing alongside the placement and number of windows. For example, if you want south-facing windows to capture the view, consider fewer or smaller picture windows, that frame the view.

If you are building new, consider upgrading to windows better than double glazing. If you are renovating consider at least double glazing for any window you replace. And remember that frames are just as important as panes. If you are selecting your window frames, consider paying a little extra for thermally broken or high performance frames – these will significantly reduce (or possibly even eliminate) window condensation so you won’t have to wipe down your windows or repaint your window sills as often.

Architectural trends in residential design since the 1950s have led to larger windows, and more of them. Bigger windows let more heat in during summer, and let more heat out in winter. You will want to carefully consider the size and placement of windows – bigger isn’t always better.

To make the most of the sun for warmth and natural light, your home's main living areas (or any rooms you use a lot) should face north. The main glazing in the house, such as windows and glass doors, should also face north. Anywhere between 20°W – 30°E of true north is fine.

Position windows to make the most of the sun.

The sun is at its hottest at noon when it is at its peak. Because of this, ensure eaves over northern windows are wide enough to keep the sun out in summer, but not so wide that they block it from coming in during the winter.

Overheating and glare is becoming an increasing problem in New Zealand homes, with the trend towards larger, floor to ceiling windows.

You'll want less glazing facing west because of the potential for glare and overheating from late afternoon sun – particularly in hot, still summer climates, and if you aren’t home during the day.

East-facing glazing captures morning sun and can be sized according to your preference in summer for light, heat control and ventilation. Glazing placement needs to be considered carefully to avoid issues with glare on working surfaces – particularly where there is an east-facing kitchen or study that is used in the morning.

South-facing windows receive minimal sun and should be relatively small to minimise heat loss but allow for diffused or reflected light and ventilation.

Ask your designer to run a thermal simulation of your house design and optimise the amount and positioning of glazing. This will help to prevent overheating in summer and reduce heat loss in winter.

Even if your home doesn't face due north, windows can be positioned to get north sun.

The sun travels higher in the sky in summer.

For existing homes and hot climates, shading is an effective way of keeping homes cool in summer. In the north, this is typically done through the use of eaves, wide enough to keep the summer sun out of the building to avoid overheating.

Overheating is typically at its worst on summer afternoons. Due to the sun’s lower angle in the west, eaves are rarely effective at keeping the sun out. Here it’s better to install external shading, such as retractable awnings, louvre canopies, deciduous trees or vegetated pergolas to help minimise overheating in summer, but let sun in during the winter.

If there is no room for external shading, you could consider putting in windows with a tint or a special coating – but remember these will reduce the heat gain in winter, just when you want it.

Shadowing from landforms, trees and buildings

When the sun angle is at its lowest in winter, objects to the north can cast shadows two to three times their height. To make the most of the sun, your home should ideally be positioned as far as possible from neighbouring buildings, terrain or vegetation that might block north sun.

If you are looking for a section, look for a site that:

A north-facing section that is very narrow will give you limited ability to place living areas and bedrooms along a wide north wall. Try making the most of morning or afternoon sun in a number of rooms.

On tight sites, building along the southern boundary is a good idea if your local council permits it. Check the Local Councils website for council contact details

Keep in mind that objects to the north can cast a shadow of two to three times their height in the middle of winter – even at noon.

Even if your site isn't ideal for catching the sun (for example because it slopes down to the south), it may be possible to maximise the sun's warmth using north-facing clerestory windows, skylights or position glazing higher in the walls to catch the sun.

Clerestory windows have the added advantage over skylights that in summer, when the noon sun is high on the sky they limit the amount of light entering and thus reduce the risk of overheating. Because clerestory windows and skylights are typically out of reach, they should be specified with as high a thermal resistance as possible to reduce the likelihood of condensation around the frames and on the panes. Condensation runoff can cause significant damage to wall linings, and sitting water can cause premature degradation of window sills and surrounds.

A clerestory window will bring north sun into a south-facing home.

Cooling when you need it

As well as shading, consider having windows located to easily allow cooling summer breezes to ventilate the house. A house with a narrow footprint has generally shorter air flow paths across the rooms and can therefore benefit more from natural cross flow ventilation from opening window.

If a house has two or more storeys you could allow for central ‘stack’ ventilation between the floors, which can be further enhanced through an opening skylight or opening clerestory window.

Letting in breezes, keeping out wind

From southerly gales to north-westerly blasts, wind is an issue in many parts of New Zealand. Ideally, you'll orient your home in a way that avoids the strongest and coldest winds – but still allows you to harness mild breezes to keep you cool in summer.

You can use vegetation, landscape and building structures to filter and divert harsh winds. Other features will also help, such as well-designed windows.

When you're thinking about orienting your home to catch summer breezes and avoid colder winds, consider whether:

Capturing the sun should usually be your first priority, but if wind exposure is a major concern at your site you may choose to place your house away from ridges or valley floors that channel the wind. If the site is very windy you may choose a single-storey design rather than multiple storeys to reduce the surface area exposed to the wind. Including a sheltered courtyard may be a good option to create a less exposed outdoor space. You can also plant hedges to shelter behind.

If on the other hand you want to capture summer breezes you can plant hedges or create external feature walls to form a funnel directing the wind to where you want.

As well as sun and breezes, you'll also need to consider:

Achieving the ideal orientation is about striking a balance between sun, breeze and these other factors. If you compromise on orientation in order to take advantage of views, you may still be able to make your home energy-efficient by using features such as good insulation and well-placed, well-sized windows.